A Tour of Drip Campaigns

Do you fully understand what campaigns in Drip entail? In this tutorial, I’m gonna walk you through the features.

In a previous tutorial, walked you through what a campaign is in my comparison between campaigns and broadcasts.

In this tutorial, I’m gonna assume you already know what a campaign is and we’re just gonna dive into the features.

To get familiar with campaigns in Drip, we’re going to look at my Action Tips campaign. This is an automated sequence of emails that go out every Friday to my subscribers. I send them valuable tips on how to build a business with a blog. 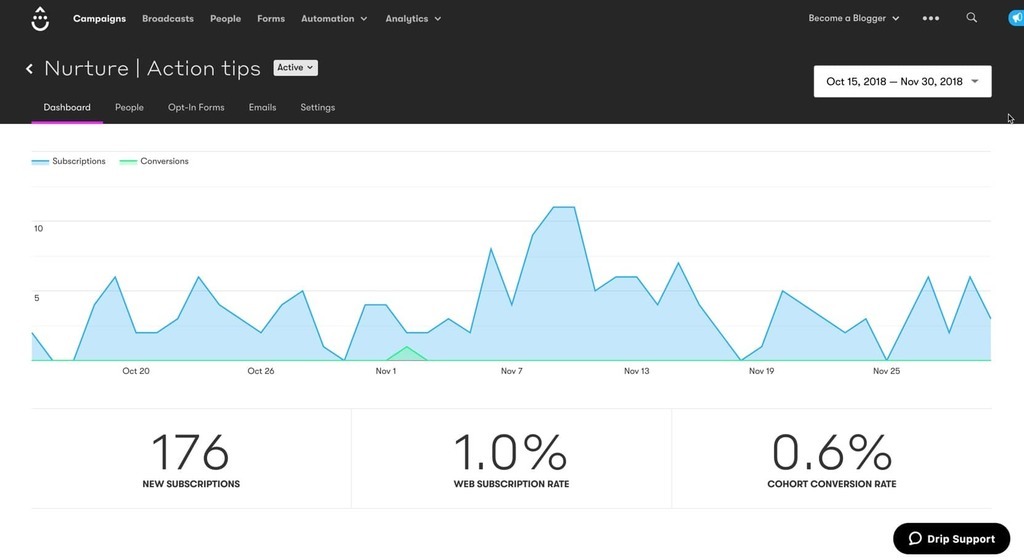 On this first page, you see the dashboard, which gives you an overview of two things: the amount of subscribers and the amount of conversions.

This specific campaign doesn’t have the goal of converting subscribers into customers.

It’s basically a nurture sequence where I’m just providing value, so the conversion rate will be zero. As you look through this screen, you’ll see the number of subscribers that have been added on a daily basis.

If you’re tracking conversions, you will see those here as well. If you want to change the date range, you can click on the date range, selecting the new range and clicking apply. 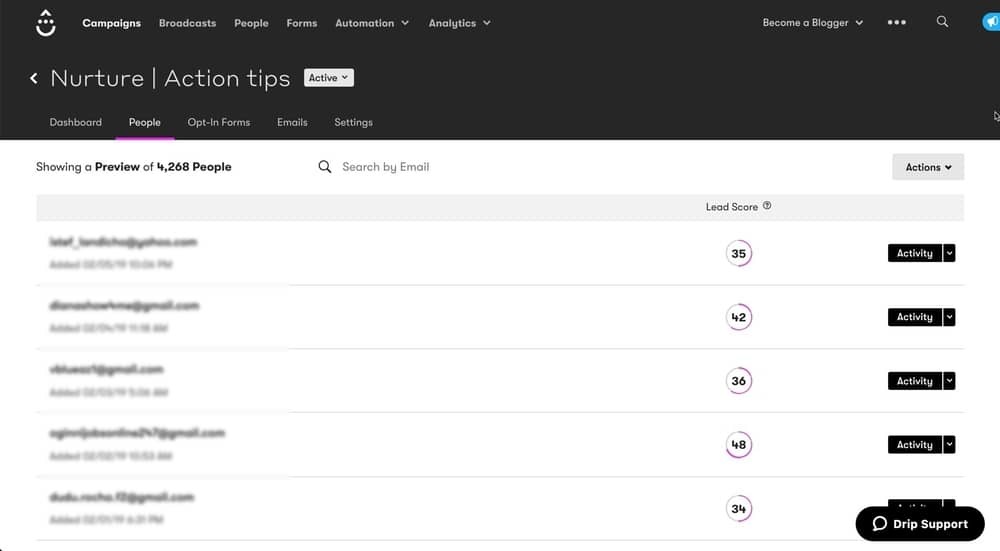 This shows the amount of Active Subscribers.

If you click on “Active”, you can also see who has unsubscribed as well as those that have been removed.

Also, it’s sorted here by Most Recent by default. If you want to change that, you can change it.

You can also see your subscribers’ lead scores.

This is a measure of how engaged your subscribers are. Are they opening your emails? Are they clicking your links? Are they doing some key activities that you specify in your drip account.

There’s a lot that can be done based on these leads scores.

The magic happens in the “Emails” tab. You see the emails in your campaign. You’ll also see some very basic analytics like the Opens, Clicks, Replies and unsubscribes. It will show you percentages by default.

But if you hover over those percentages, you also see the raw numbers.

The next thing you’ll see is the status, which can be either published or Draft. This comes in handy if you are still working on those emails. You can save them as drafts until you’re ready to unleash your campaign ON THE WORLD.

The next thing you’ll see here is the “Delay between emails”. You can set when those emails should be sent. So, since mine is a weekly email that I send out only on Fridays, you’ll notice here that the first one goes out on day 0 and all of the others go out with a 7-day delay. 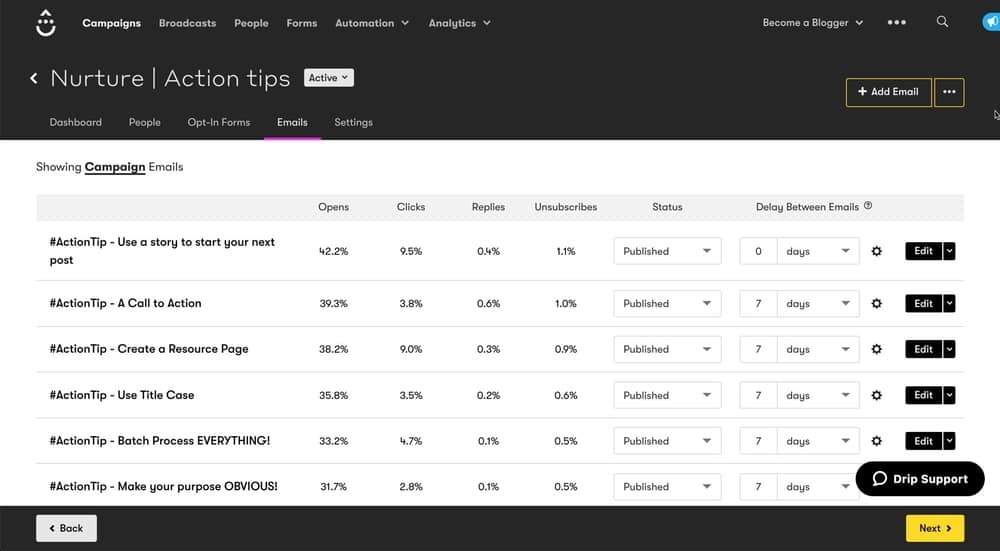 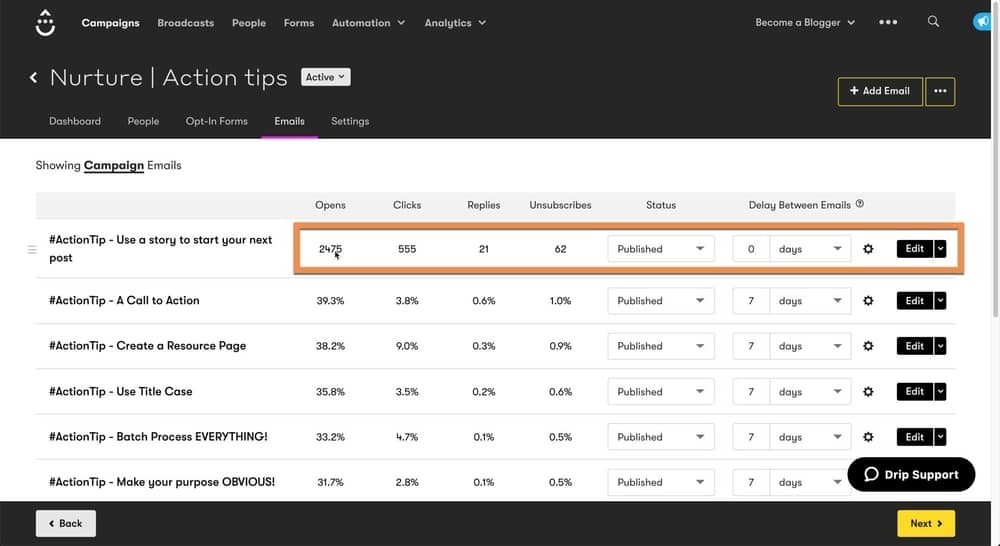 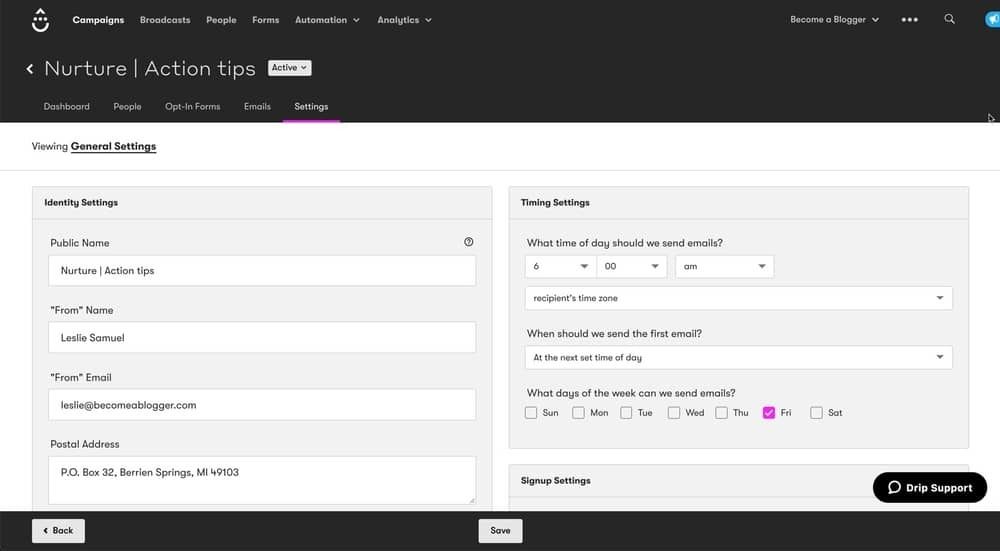 Lastly, you can adjust the general settings for the campaign in the “Settings” tab. This is gonna determine everything that’s happening in the campaign. From identity to timing, the confirmation page and any notifications that are sent. This is where you set those things.

QUESTION: If you were to create a campaign today, what would be the goal of that campaign? Go ahead and leave your answer to this question in the comments area below.